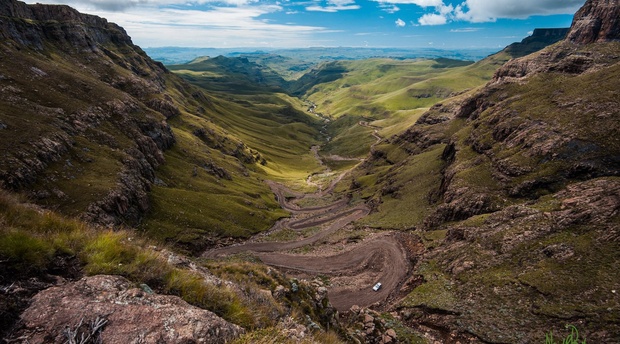 The goal of the upgrade is a hard-surfaced road, mainly tar but including short stretches of concrete on steep sections, from the end of the present tar road at the ruins of the Good Hope trading store to the Lesotho border post.

The upgrading began in late 2016. There are three stages to the upgrade, two already in operation and a third in the planning stage. In terms of the terminology used below, Phase 1 is the completed tar stretch from the Sani Pass turnoff on the Lotheni-Himeville road to the ruins of the Good Hope trading store. Phases 2a and 2b are currently under construction. Phase 3 is under design.

Phase 2a consists of two bridges and seven culverts on the 11.4 km of road from the Good Hope to the South African Border Post. The scheduled completion date is February 2019 and the contractor is Chris Africa Civils. Phase 2b is the tarring of this 11.4 km stretch of road. For those who are unaware, the South African Border Post is situated 8km by road from the actual physical border between Lesotho and South Africa. The contractor for Phase 2b is Leomat and the scheduled completion date is July 2020. 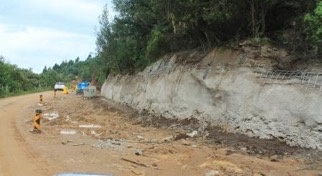 The bridge at the Fountain of Youth

Phase 3 will be the 8 km road stretch from the SA Border Post to the border, including an altitude gain of nearly 900m. The design is in process. At present, there are no firm starting and finishing dates for this stage, although unconfirmed suggestions are that this might be completed within another 4-5 years.
One of seven substantial culverts 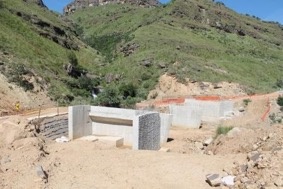 Many critics believe the construction will be delayed for several reasons, not the least being the destructive summer thunderstorms. It is possible that a repetition of the extreme storm of January 2016 could reverse months of construction work. Only time will tell when the road will be completed.

Building this road is difficult. Apart from the problems of building a mountain road with a very steep altitude gain, the road has to remain open throughout the process, with the exception of occasional brief stoppages for construction activity. The road in Phases 2a and 2b to the police post is being built on unstable and highly erodible sediments which demand extra engineering support.

In addition, the construction is subject to an Environmental Management Plan (EMP) issued by the KZN Dept. of Transport. The EMP seeks to limit damage to the natural environment, and includes the rescue and replanting of designated plant species and rehabilitation of the road edges. At this stage, it appears that there will be minimal blasting on the lower section of the road, a blessing for tour operators. Interestingly, a major plus is that the EMP requires that alien vegetation be removed, which could be very significant as the unconstrained expansion of existing wattle patches over the next 50 years would dramatically change the natural environment.

In building the road, the Dept. of Transport manages interaction with the public in part through a Project Liaison committee. My early casual enquiry to an engineer on the pass in 2016 lead to my appointment to this committee. This appointment was only possible because the Southern Drakensberg Community Tourism Organisation provided me with a mandate to represent tour guides and operators and the tourism industry as a whole. Meetings are held once a month, and although the issues are very largely focused on the awarding of contracts and sub-contracts, and labour issues, it provides the tourism industry with an opportunity to raise issues important to tourism. Thorsten Gopp is also a SDCTO representative at these meetings.

Consider the issue of signage from the point of view of interpretation for the visitor. The road runs through the Maloti-Drakensberg Transfrontier Park, one of South Africa’s finest wilderness areas; a pristine and incredibly scenic area. The essential selling point for most tourists (manly foreigners) is the natural wonder of the Pass. By contrast, it is probably fair to say that most South Africans view the San Pass largely as a vehicle or sporting challenge. They often travel unaware of the natural environment, missing the experience of interpreted trips.

The tour operators offer interpretation to their clients through their guides, and so ironically, foreign visitors to Sani Pass come away with a holistic understanding of the Pass compared to most South Africans, who are self-drive and without any signage to enlighten them. Thus there is a great gap – the lack of any signage which identifies the area as a World Heritage Site, let alone anything else. I believe an enriched understanding of the Sani Pass would add significant value to everyone’s Sani Pass trip. It might reduce the amount of rubbish dropped on the pass by all users. There is also no signage informing tourist that there are activities which are incompatible to wilderness areas, such as overnight camping, making of fires, collection of firewood or plants and flying of drones.

Again as an aside, the tourism business in our region should be aware that the Honorary Officers (Southern Drakensberg) with the assistance of KZN Ezemvelo Wildlife staff have for years been performing two vital activities to protect the long-term integrity and tourism value of the pass – alien tree (mainly wattle) control and collection of rubbish. These are voluntary actions reduces the impact of these negative factors on tourists. Recently, the staff of Sani Mountain Lodge have been clearing litter, focussed of course on the upper pass. Tourists often comment on litter, so the cleaning-up operations are vital in keeping this negative impact under control.

Returning to the Public Liaison committee meetings, I have been able to influence the location and type of viewing points along Phases 2a and 2b, i.e. the road construction up to the SA border post. Through submission of an inventory of major or minor stopping points, followed by on-site discussion of these sites, major and several minor stopping points have been identified and will be added to facilitate tourism. This is critical because it also provides for safe viewing stops which support tourism activities, including refreshment sites for adventure sport such as the Sani Stagger. Such sites are of two types; major sites which will accommodate multiple vehicles and minor sites which further provide for alternative uses of the pass such as birding and botanical tours and adventure sport. Major sites will be hard-surfaced and bordered with an 800m high wall, finished in a way to blend in with natural surroundings. If stopping sites are not provided, the new Sani road could become more dangerous because vehicles will stop in predictable but dangerous places to photograph the scenery.

Inevitably, the provision of a tar road will allow smaller 2-wheel drive vehicles onto the pass. All drivers will drive faster than at present; and the potential for increased accidents is there. This is especially the case when one considers inexperienced drivers under extreme conditions of snow and ice. At higher levels on the zigzags, I believe that signage should additionally focus on warnings about conditions under exceptional conditions; when snow and ice are present, and perhaps driver behaviour under challenging conditions including heavy traffic under adverse conditions. Without such care, the Sani Pass could become deadly despite the improved road surface; in fact ironically, the improved road surface may create new conditions exposing inexperienced drivers to danger.